The new Xp 33 will become a new trendsetter, skriver X-Yachts i dag til pressen på engelsk.

The new 33 ft X-Yacht benefits from the X-Yachts latest composite technology. The hulls are laminated in a full sandwich construction using vacuum infusion to establish the best ratio between the vinylester matrix and the structural fibres.

A fast yacht depends on a good level of stability to carry enough sail.  This stability can come from a number of sources, mainly hull beam and a low centre of gravity.

This route to stability is not without cost though. It also increases the wetted area of the hull making it slower in light airs and the increased beam above water only helps when the crew are hiking, not when you are sailing short-handed or when things go wrong.

For this reason X-Yachts have always been focussed on keeping the yachts’ centre of gravity as low as possible.  Using advanced lamination techniques and efficient structural solutions, they can keep more weight in the keel where it belongs.

X-Yachts is well known for producing good all-round performers and the new X-Yacht models are seen as market leaders!  Some sailors love to get the adrenaline running on the race course.

Others just like to cruise in a yacht that performs well and responds to good trimming and seamanship.  By providing the perfect balance between sailing performance and practical solutions, X-Yachts are able to cater for both!

The Xp 33 is lighter than many production competitors.  In addition to the lamination technology described, every detail has been investigated and analysed in the pursuit of the right weight-practicality balance.

Above deck the halyards and trim lines are exposed to keep the structure simple and light.  There are no hull windows and limited deck hatches to simplify the deck whilst maintaining enough light and access.

Below deck you will find a very functional and lightweight interior.  The structural bulkheads are made from plywood securely bonded to hull and deck but the furniture is partially crafted in composite materials.

This “simple but effective” approach to the Xp 33 will be the key driver to her performance.

Compared to her, the new Xp 33 is expected to sail almost 10% faster VMG (velocity made good) against the wind in medium wind speeds and between 10 and 15% faster on a broad reach in medium to fresh wind speeds, according to X-Yachts' VPP tests.

Xp 33 will have almost 70% higher stability enabling her to carry her 15% larger sail plan much more effectively (full racing main and asymmetric spinnaker).

That, blended with an increase in waterline length of almost one meter, gives the Xp 33 that extra boat speed potential, which once again, will set the standard in the 10 meter performance yacht market. Carbon fibre retractable bow sprit is standard as is the composite tiller. The yacht comes with aluminium mast and boom with discontinuous rod rigging as standard.  A slightly taller carbon mast is available as an option for increased stability and sail area.

As standard, the keel is a cast iron ‘T-keel’ configuration with a draft of 1.90 m, with an option to upgrade to a 2.10 m deep composite keel with a lead ‘T’ bulb.

The deck lay out facilitates an under deck furling head stay drum (optional) and the standard anchor compartment can accommodate an optional anchor winch.

The all new Xp 33, expected to launch by the end of 2012, springs from the original X-Yachts DNA delivering thrillingly sailing performance! 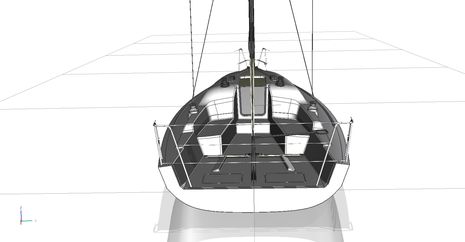 The next 33 was the X-99 which formed a ‘one design’ Class and achieved official ISAF Recognized Class status.  More than 550 were delivered and the class is still active in Northern European countries.

More recently in 2007 the X-34 was launched.  She is an attractive and very comfortable cruiser/racer and enjoys great winning qualities.

She performs very well under most handicap rules, especially under IRC whilst maintaining impeccable sea keeping for the dedicated cruiser. The X-34 is set to remain in the production portfolio alongside her new younger sister.