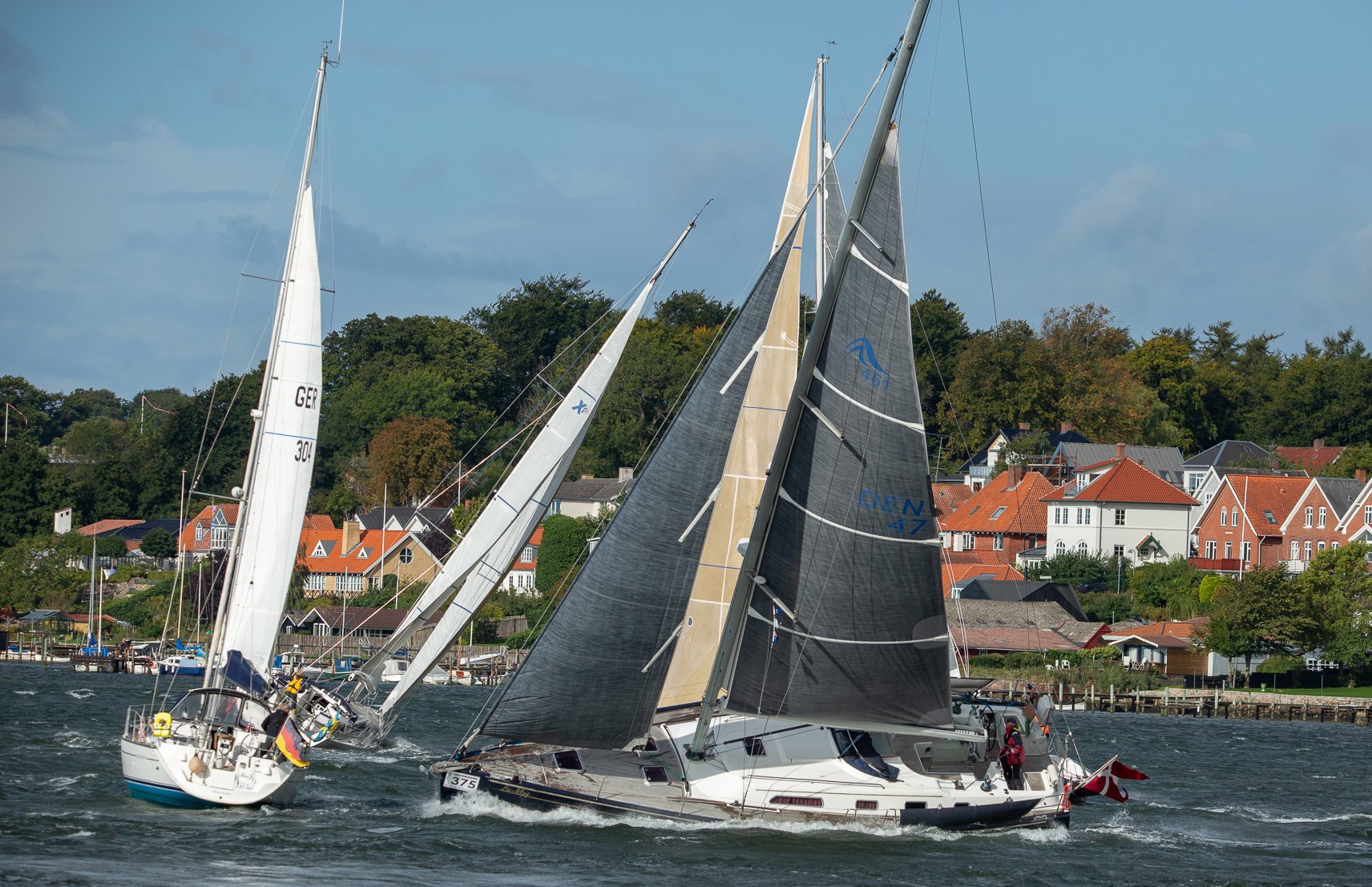 Af Troels Lykke | 04-10-2018 08:30
Silverrudder is a non-stop singlehanded regatta round the Danish island Fyn, a distance of 134 sea miles. This year I took part in the regatta with my 11-meter one design Petrulla.
The race is open for sailors complying with safety rules to be found on the silverrudder homepage www.silverrudder.com. The race was launched in 2012 with a few participants and has grown to now 418 registered participants in 2018.

Participants aome from all over Scandinavia and Europe and the participants were registered within 40 minutes after release of signing in for the race last November 2017.

I sailed my boat from Marstal to Svendborg on Wednesday and expected the start to be Friday. But due to stormy weather the start was postponed to Saturday.

Saturday morning 138 boats did come to start out of the 418, probably due to the still rough forecast for heavy weather during Saturday – SW-W 10-15 m/s, with gusts up to 20.

I put a reef in my mainsail (old Australian one) and had my self-tacking jib on. I did a reasonable good start and was, during the tacking westward out of Svendborg Sound with strong current with us, among the 3-5 leading boats in my start.

But your placement is rather arbitrary because there are no handicap rules in the race, you are simply divided into classes according to your hull length and that’s it.

This signalizes that this race is a race against yourself and your seaman ship, rather than a race against other boats. I was in the start among the boats with a hull length from 30-35 feet.

For many boats the start was rather dramatic due to the heavy wind and strong current, several ran ashore or into the pillars of the Svendborg Sound bridge, and later broken masts and torn sails were seen.

Some expensive hours for the insurance companies. Of the 138 boats started 53 finished the race.

After having tacked through Svendborg Sound we came to Lillebælt still tacking almost up to Assens half way through Lillebælt.

I did several times during the tacking evaluate my participation due to the heavy winds.

I had to take down the jib twice to repair it, first the sheet tore the metalplate in the corner of the sail and then the sjekel fastening the front of the jib to the deck was torn and needed replacement.

But this was rather undramatic although there were some waves and a need to give one hand to safe your self and one hand to the ship.

The most dramatic situation onboard ‘Petrulla’ was a gust of plus 20 m/s were I just was laid flat with the mast and keel horizontal out of water.

I could only stand on the side of the cockpit and waited for 3-4 minutes before the wind calmed a bit and ‘Petrulla’ raised itself again – not too far from the leeward coast, slowly floatning nearer. In fact it was not dramatic, I could do nothing but wait and hope for no damage.

Then at Bogø in Lillebælt towards Middelfart and Fredercia I got a little sleck on the sheets and ‘Petrulla’ started overtaking the few boats ahead.

I came very nice through the strong current against us in the narrow part of Lillebælt by going quite close to the shores were the current were less strong and sometimes even pushing you in the right direction.

In Lillebælt my self-steering device got tired, so from there it was purely hand steering.

So far I had sailed with reefed main and jib. In Lillebælt I took out the reef as I had winds from behind from Lillebælt to Storebælt across the northern parts of Fyn. I experienced a thrilling fast sailing with wind 10-14 m/s and surfing on top of the wawes from 1 -1/2 to maybe 2 meters of size.

The stern ducked into the waves in front and rose again with water all over, dreaming I was in the Southern Ocean. My speed varied from 8-14 knots.

The bigger boats that came up from the later starts in Svendborg were again distanced behind ‘Petrulla’ on this part of the ride into the dark night.

From Fyns Hoved I ducked down into Storebælt on a half wind and after 4 hours passed the bridge of Storebælt.

I again entered Svendborg Sound and the finishing line after having sailed 134 sea miles in 21 hour and 15 minutes.

I was fourth keel boat finishing and number two in my class after a JPK 10.10 - not bad and I am amazed that it is possible to sail 11 meter in that much wind alone on board and without no damage to hull or rig. Self-tacking jib is a big advantage and then a bit of luck to avoid damage.

It would be wonderful to have more 11 meters in this single hand race, but remember you must sign in on the 24. of March from 17.00 (check time and date on homepage) and onwards, and be aware that if you don’t sign in within the first half our after signing in is released the max number of participants (450) is likely to be reached and the race is closed for more participants.
Sailor greetings, Erik 11 MOD DEN 169 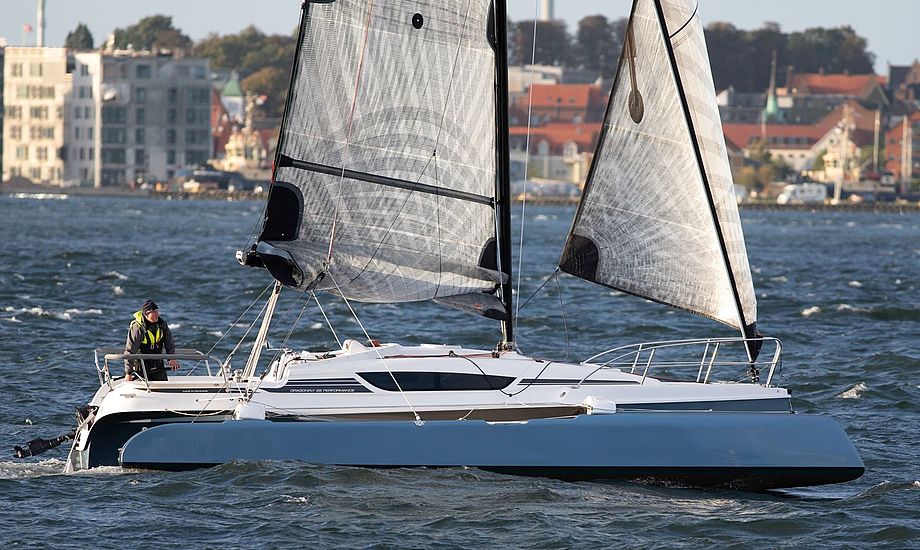 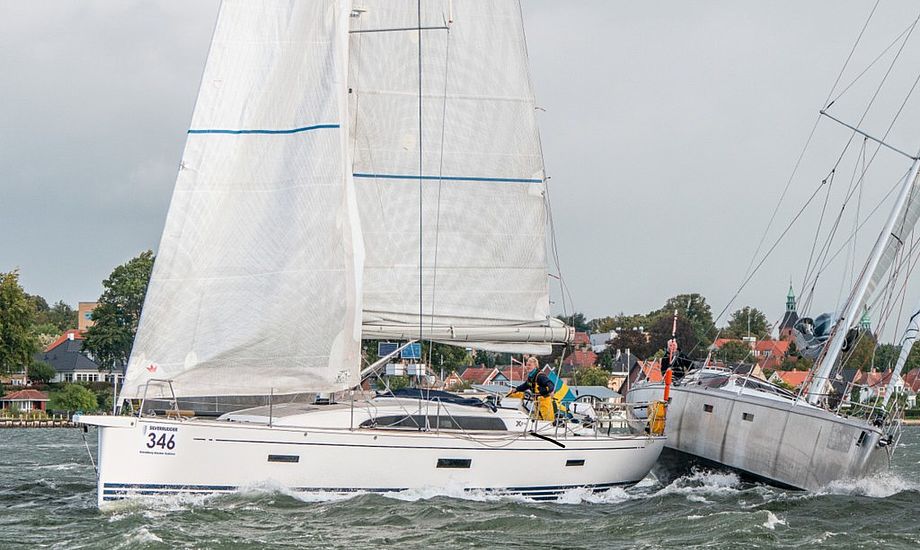 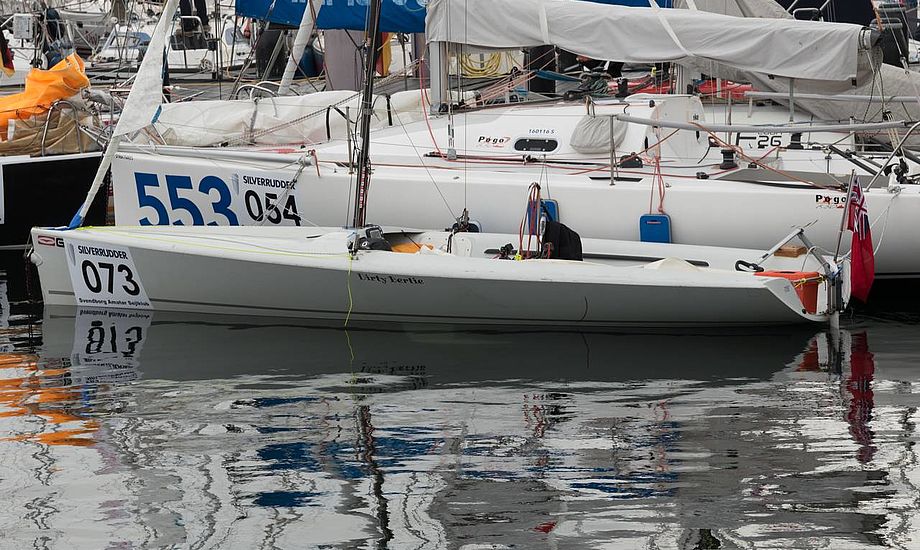